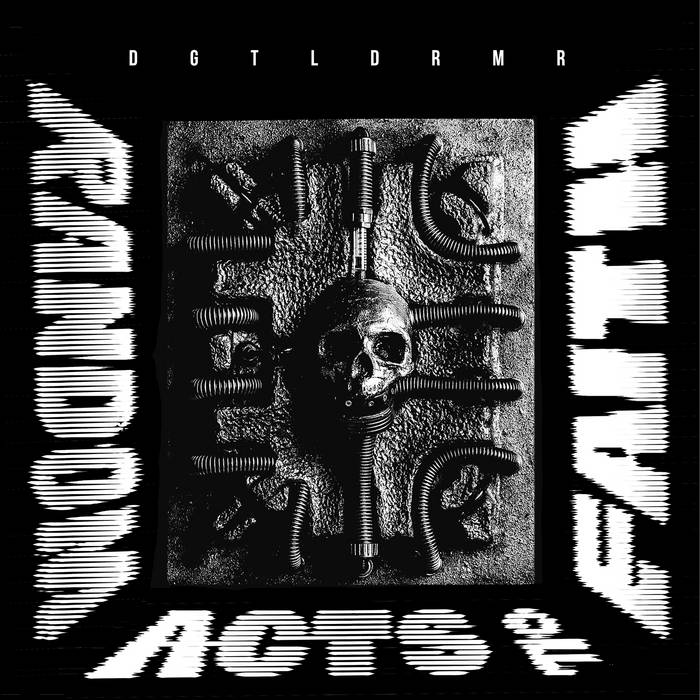 It was definitely a skull. Human. It looked Human. Everything Zu had studied about the ancient species seemed to confirm his assessment. Would anyone believe him or the authenticity of his finding? Traces of anything Human hadn’t been found in centuries.
And what kind of contraption was the skull attached to? A heavy block made of a petrified substance he couldn’t recognize engulfed the osseous vestige. Some SPACE GREY tubes ran around it and some kind of measurement device had been speared into the cranium’s top…

Cannibalines. The word rung in his head. The monsters from the stories — fables really — he heard growing up. Not distinctively biologic or technologic at first, just beings IN LIMBO. Born as metal, they were said to require a comatose living being to feed their ability to… function. And by functioning they became more and more alive, until they were indistinguishable from an actual biological entity.
Non-sense. Ghost stories. It is unlikely to find an untaped Human skull, that is true. But the skull is right here and Humans did exist. It has been proven numerous times. But Cannibalines are just tales. The contraption had to be some piece of archaic medical device the Humans used. It had to be.

Colonel Er Minx arrived shortly after Zu gave the call. His jet black airship had barely touched ground when he leaped out and started walking towards him. He greeted Zu with a short nod. No official salute and no word whatsoever. He frowned at the object on the turned earth for a short second. Then he scowled at Zu while signaling his crew to move faster. They were unloading an heavy box, a container of some sort. It seemed his finding was getting picked up.
Er Minx put an hand on Zu’s shoulder and brought him aside, while the other corps rounded the contraption and began wrapping it up with a reflective black-gold cloth. “You know, Lieutenant, some say we live in a POST-TRUTH world,” he spat. “And I’m very aware that you are the kind to believe such a thing.”
“I will not deny it, Colonel, sir.”
“I see. You may also know that I, for one, have attended many a FUNERAL to even entertain those thoughts.”
“I’m not sure I understand, sir,” Zu replied. From the corner of his eye, he could glimpse the other troopers carefully lowering the contraption he found into the container they had brought.
“Well,” the Colonel said, his tired voice full of scorn, “let me make it clear for you. Many have died to protect our kind from what you may refer to as ´the truth´. You may feel our current state is some kind of LIFE BEYOND FICTION, but I guarantee you, this is the best option for everyone. This much, you deserved to know. We thank you, deeply, for all your effort and dedication.” A soft click and a leathery sound alerted Zu’s senses.

Suddenly, Colonel’s Er Minx gun was drawn and pointed directly at him.
At his face. The cold metal touched the tip of his nose and almost tickled him. Then he smelled death and something exploded inside his mind. For a fraction of a second, both his eyes saw different things. Then, all was purple.

Generated in the void that existed in limbo, dgtldrmr realized that the his dream world belongs to him.

Alone, he is the architect of a universe where everything is possible, made up of zeros and ones.

Bandcamp Daily  your guide to the world of Bandcamp